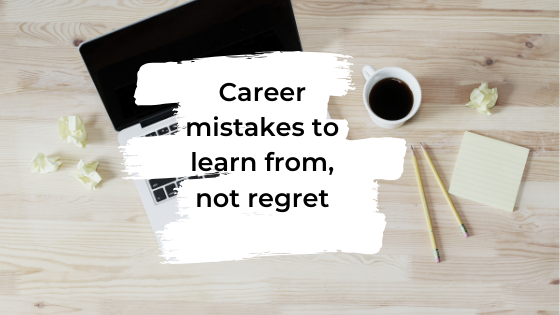 4 lessons I learned from a bad career decision

Have you ever made a bad career decision and later realized, “what was I thinking?”

Well, there was a point in time I thought these kinds of decisions often happened in the form of career moves when moving from one company to the next. I didn’t think they can also be choosing roles within your company you could later regret.

I believe in learning more than holding regrets in life, but boy did I cringe when I realized the decision I had made. A poor one to say the least. Or maybe it was the opportunity itself that was bad. Let’s just say they both sucked.

Like most driven professionals, I was getting the itch to do something else after a few years in my company. Being a small, flat organization, options were limited, to say the least, yet I remained open to opportunities that could potentially foster my growth.

After learning the scope of a role presented to me and the potential it had to offer, I nervously and ultimately accepted. Those nerves were signals of fear, doubt, insecurity, yet excitement, eagerness and that badass warrior in me coming out saying, “you got this” all at the same time.

While it was so easy to listen to the voices that were screaming with doubt and the other annoying feelings that were trying to dissuade me, I ignored them and chose the ones that were encouraging me.

Unfortunately, after a few short months (if that) of being in this role, the opportunity wasn’t offering the growth I was hoping for. I saw it right from the beginning. It felt like a step back and I was contracting vs. expanding.

Much of what was said about the opportunity wasn’t living up to its expectations. I wasn’t experiencing the challenge that was promised (or would have) and frankly, the scope wasn’t a match for me. My approach, my style, my skills and more importantly my potential. It all felt like those were being underutilized, to say the least.

I felt like I was sold a bill of goods by my own company.

The very people I thought ‘knew me’ enough to offer an opportunity for me I felt didn’t know me at all. I misjudged the role of this manager assuming someone managing me would know better. That wasn’t the case here. This was also the 4th manager at the time in 4 years.

I ultimately had the uncomfortable conversation to say this was the wrong role for me and I wanted to go back to the position I left. I knew it was the right decision for me, just as I knew very soon after I had accepted the new role that it wasn’t the right fit.

What I came to learn from this experience at a very early time in my career proved to be invaluable:

There are lessons to learn in life and in your career with every decision you make. None of which you should be regretful of. Yes, I know easier said than done. But what I’ve realized is those decisions I thought were ‘bad’ were actually redirecting me to what’s right. That’s worth going through the experience for me and learning from it.

You are the best person to know what you need at any given time and more importantly, what you want. Even when you think you don’t, you might just be selling yourself short.

Some of the most important career moves we can make yield the biggest growth and can offer the biggest lessons. But we also learn from the ones we wish we didn’t make.

What’s the biggest lesson that stands out from a career move you wish you didn’t make?

I’d love to hear your story, please share your thoughts in the comments below. Your experience can be the very one that someone else may just need to hear.

With so much love,